We recently got back from the biggest road trip of our marriage.

We had a few things to do in the San Antonio area, including a 10 day family reunion in Seguin, TX, and a 2 day conference for work.  (see the map below, which shows the route we took)

Initially we were going to drive to and from the reunion, and then I’d fly back to San Antonio, but the timing just wasn’t working out.  So we made a four week trip of it, which allowed me to speak a number of times while on the road (In Austin 3 times, San Antonio once, and Albuquerque once).

It was… a trip!  I appreciated all of the people I met who complemented me on doing this with my family, making memories, etc.  There were lots of highs, a few lows, and tons of great memories.

My biggest regret, really, was that I *didn’t* catch the three foot water moccasin, as I think it would have made a very nice office decoration (stuffed, of course :)).  I was really, really close to having it… but I had it pinned down with a very light broom handle, instead of a heavier oar, which would have allowed me to catch it :s

There are lots of reasons to not go on a trip like this.  Money is a big one.  Time is another.  I took four weeks to do this, which I perhaps could have spent blogging, or writing, JibberJobbering.

But there were better reasons to do it…. I want to make sure my kids have family memories they can lean on when they move out of the house, and this is how it’s done.

I’m back now, though. I’m renewed from my vacation, even though I’ve found it hard to get back in my seat and work as long as I have before.

Also, being away was refreshing… I had time to get “out of the forest” so I could see the trees… I’ve rededicated myself to some projects I’ve needed to finish, and am excited to move in the directions I’ve needed to.

Here’s where our trip took us: 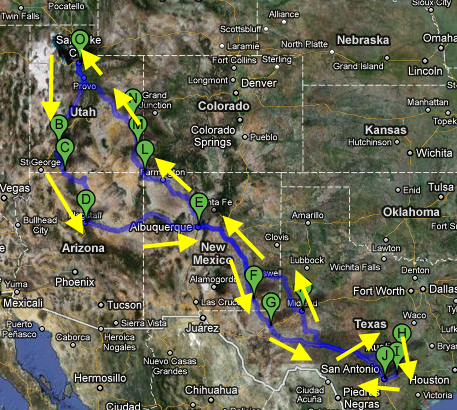 Like I said, lots of reasons to NOT do a trip like this.  But after writing WHY NOT (one of my favorite posts), I knew, there was not a good enough reason to keep us from doing it 🙂