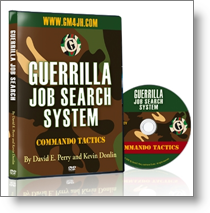 If you’re looking for a job in this economy, here’s important news …

David Perry and Kevin Donlin, the co-authors of “Guerrilla Marketing for Job Hunters 2.0,” are doing a free teleseminar for readers of my blog on Friday at noon EST that you need to listen to.

Maybe you’ve read them in the New York Post, Fortune Magazine, or on MSNBC.com … or heard them on CBS Radio … or seen them on NBC-TV.

What matters is that you listen to a new teleseminar that I convinced them to do for JibberJobber people.

David and Kevin just helped 4 more people find jobs fast — they were hired in anywhere from 8 days to 7 weeks, which is 75% FASTER than the national average of 29.7 weeks.

That’s like putting 22 weeks worth of lost paychecks back in your pocket.

Want to know how they did it?

If so, then they’re here to help you — for FREE.

Because they want to do a “beta test” of their job-search training with a live audience before starting a national advertising campaign.

So, they agreed to let me host a special, one-time *only* teleseminar on Friday at noon EST — at NO cost.

During this content-packed phone call, lasting about 50 minutes, you will discover:

As you can see, this will not be your average teleseminar.

David and Kevin have put together some of their best Guerrilla Job Search secrets … and we hope YOU will mark your calendar for Friday at noon Eastern, for this exciting event.

NOTE: If you DO get shut out of the call due to overcrowding, don’t worry! I’ll post a link on my web site where you can download a recording and listen later.