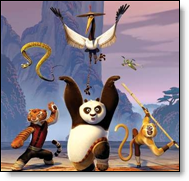 Last week’s series was pretty serious (read my experience with age discrimination in the job search, the age discrimination story here, strategies, tactics and then lessons learned).  I figured I’d change the tone and relate another superstar’s story to your career, considering how fun My Gordon Ramsay posts were (Part I and Part II).  Today, we talk about Kung Fu Panda!

I have to admit, I wasn’t excited about watching Kung Fu Panda for one reason: it isn’t a Pixar movie.  And we all know, cartoon movies suck unless they are Pixar, right?   I’ll tell you, Kung Fu Panda is one of my favorite movies ever, and I rate it even better than a few Pixar movies!  Let’s talk about lessons from The Big Fat Panda and Your Career.  Oh yeah, sorry in advance, but there a few spoilers in the post – so stop reading now if that’s a problem.

Kung Fu Panda has a dream, and a passion. His obsession is on his mind all the time.  He decorated his room with Furious Five souvenirs and has their action figures.  He has probably read everything there is to know about it, and is probably one of those friends who can talk about little else.  While it’s unreal to think he could ever do any real Kung Fu, he doesn’t act like it’s impossible.  Do you act like your dream is impossible?

Kung Fu Panda knows is a real subject matter expert. When he goes into serious training as the Kung Fu Panda, his obsession with the furious five gives him an advantage.  He isn’t in the physical shape a Kung Fu Warrior would be in, and he has a hard time in training.  But his knowledge of the space serves him well.  Do you have broad and deep knowledge of your space?  If not, why not?

Kung Fu Panda’s dad thinks he’s nuts, and not doing what his destiny really is. How many of us have close loved-ones who just aren’t behind what we’re doing?  Supposed to go into the family business, or be an accountant or doctor?  Is your career path too “out of the box?”  Until you get a guarantee from whoever this close person is that they’ll pay all your bills and give you raises and bonuses for the rest of your career and a pension into retirement, I suggest you trust your own gut and decisions, and not follow the dreams or plans of someone else.

Kung Fu Panda is relentless, for the most part. The morning after his first day of training the Furious Five find his room empty and assume he’s gone, humiliated and overwhelmed.  Good! They can get back to some real training!  But… when they get to the training yard, they find him there already started for the day.  He didn’t give up.  And, after greulling days of training that would destroy anyone else, he stays around.  Not sure why, except he likes the amazing opportunity he has (not to be the Dragon Warrior, but to be in the presence of great people every day).  When the going gets rough, he sticks around.  When your going gets rough do you stick around?  Or do you high tail it out and look for greener pasteurs?  I’m not saying it’s always best to stick around but sometimes we just have to suck up the bad stuff to get to the good stuff.

Kung Fu Panda is real. He doubts his own destiny, which in a cartoon, from a tortoise, has to be real… but he doubts it anyway.  Many times he doubts himself.  He doubts his master, and he questions why any of the highly trained Furious Five haven’t been chosen as the Dragon Warrior.  We doubt, don’t we?  We doubt all kinds of things, and guess what, it’s OKAY to doubt.  Everyone doubts, even rockstars.  Optimistic or pessimistic, you have to be real.

Kung Fu Panda has a sense of humor. The night he made the secret ingredient soup for his colleagues you got to see Kung Fu Panda let his hair down.  He was funny, he was the life of the party, he was entertaining.  He could laugh at himself and used humor to address the pink elephant (the thing no one talks about).  Humor is good – use it (wisely).

Kung Fu Panda understands politics. Can you image being named as the Dragon Warrior and dumped into a team where people have trained and been groomed their entire careers to be… the Dragon Warrior?  And you don’t have any of the characteristics of a Dragon Warrior, at least as far as everyone is concerned?  That’s the environment that Kung Fu Panda (literally) dropped into – and he handled it pretty good!  How would you handle an environment like that?  It’s cut-throat, threatening, scary, overwhelming… and if you mess up politically you might as well get another job.

My two year old calls Kung Fu Panda “teddybear.”  I like the lessons this teddybear teaches us!  Did you learn anything from Kung Fu Panda?

2 thoughts on “Kung Fu Panda and Your Career”