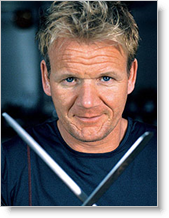 Every once in a while I write a post that people say they love.  As a blogger, my ego is fed, even when I think “but I’ve written better!”  Well, I was pretty proud of my Chef Ramsay post, titled Chef Gordon Ramsay, of Hell’s Kitchen and Kitchen Nighmares, and YOUR Career, but I did think I’d alienate a bunch of people who didn’t care about Hells Kitchen, Kitchen Nightmares, or potty-mouthed Ramsay.

I got a bunch of kudos for that post (THANK YOU!).  I was reviewing it today and realized I left out one very critical point, and one that is a hard pill to swallow.  This is a problem I suffer with, and I see it alot.  I see it everywhere … in my neighborhood, in families, in church, in school, and in people’s careers.

In a few episodes, Chef Ramsay would determine there was a team member not pulling his weight.  It was obvious to see the slacker on TV, as I think the production crew would focus on that.  Everyone in the restaurant knew about it, because they all had to pay the price by carrying the load of the one who didn’t do his job.

In one episode, a manager (I think the general manager) was in a meeting with Chef Ramsay and the restaurant team members, and the GM was laying on the bench, eyes closed, getting his hair stroked by a server.  DURING THE MEETING!  What the heck???

That clip was replayed at least once later in the show.  By the end of the show, that manager was gone.

He had gotten to casual about his duties, and his role.  The GM (1) laying, with his (2) eyes closed, and getting (3) caressed????  That’s three strikes in my book.  Definitely not appropriate meeting behavior, whether you are the GM or the trash-taker-outer.

Sometimes we are just too casual about our role in our jobs.  We might get comfortable, and slack off.  Or we might get bored and start performing less than our potential.  If that happens to you, you have two choices:

The opposite of this problem is to take your job seriously.  Take your career seriously.  If Ramsay sat down with you today and you had to tell him about your career management, are you going to hear a lot of swearing?  Is he going to lay into you?

Or are you doing it all on purpose, with a purpose, and the right way?

Heaven help us who aren’t doing it on purpose enough!