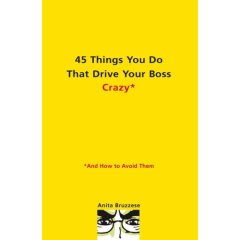 This is Anita Bruzzese’s second book (her first was Take This Job and Thrive) and it is one of the funnest I’ve read all year. On this blog I tend to focus on getting a job (or, as one reader recently wrote, bashing job seekers :p) and don’t really go into what you do once you got the job, or how to keep the job. That’s where this book comes in.

Anita breaks her book down into five sections, and has a bunch of the “things” that drive bosses crazy under each section. Here’s a small sample (paraphrasing on the Part titles):

3. Goofing Off on a Business Trip – I’ve seen too much of this

4. Earning a Reputation as a Whiner, Drama Queen or General Pain in the Neck – I’ve worked with the pains in the neck, and no one wants to be around them

5. Discussing Your Personal Beliefs at Work – there’s a line… it might be fuzzy (Anita doesn’t say that), but crossing it could be detrimental

Part Two: Bosses Get Rid of Employees with Too Many Bad Habits

12. Failing to Speak Intelligently – I’ve been there, side-by-side with an employee who embarrased me by saying the dumbest thing in front of a customer (okay, I admit, I’ve said plenty of dumb things myself :p)

15. Being disorganized – this is me… Anita gives a compelling case to clean up my act!

Part Four: Bosses Don’t Give Leadership Roles to Those Who Lack Maturity and Common Sense

29. Crying at Work – an interesting perspective from a women… I really liked this chapter.

38. Giving Lackluster Speeches or Presentations – we gotta be on the top of our game, even during the drudgery!

Part Five: Failure to Give Full Support to Your Employer Says You’re Not Ready for an Investment of Time and Resources

41. Ignoring Company Goals – when you think you are a number, and don’t have a voice… but you do, and your boss wants to know that you care (and want to make him/her look good!)

44. Neglecting coworkers – one of my favorite parts, where she talks about neglecting the coworker that, in a few months, might be the one choosing members for a special project, and doesn’t choose you because you neglected him!

A few foundational principles that come out of Anita’s book include:

Bosses don’t hire you to fire you. They want to keep you around. It’s a pain to find new employees and always try and make the team as productive as it should be. If you are the right hire they want you around!

Don’t be a dork, or stupid! A lot of the things in this book are things that *I would never do* … ! Even though many of them, to me, are “common sense,” I think about my past jobs and can’t believe how many people violated so many of these 45 things! Just amazing. There really is a need for this book.

An excellent book, a fun read, and very inexpensive at around $12 on Amazon right now.

6 thoughts on “Book Review: 45 Things You Do That Drive Your Boss Crazy*”