In a shocking blow to the career professionals world, Jason Alba was laid off from JibberJobber.com last night at 4:59pm.  JibberJobber will be managed by a team chosen by the a private equity firm that was involved in his layoff. The new management team will be announced tomorrow.

“Jason never really understood the market dynamics of a business like JibberJobber.  He didn’t pursue sales of job postings, like job boards do.  Look at the success of that model.  Even back in 2006, when he started JibberJobber, Jason thought that focusing on the needs of job seekers would be a successful strategy.”

JibberJobber has had a tenuous relationship with job boards, which seem to think of themselves as adding value to job seekers, in spite of statistics that clearly show that applying to openings on job boards is one of the least effective tactics to find a new job.  In past interviews, Alba said that job boards were not interested in offering JibberJobber’s functionality to their users. Alba blogged about one job board executive stating “our users probably don’t want to track where they apply.  If they do, they can just make a spreadsheet, or get sticky notes.  Besides, we really don’t care about the job seekers.  We are making so much money from HR and recruiters who pay hundreds of dollars to list their openings on our site that we can’t bother with job seeker’s requests.  If a job seeker complains about wanting features to help them keep track of their search, we just ignore them.  They will probably be gone in a few months anyway.”

Harris has big plans for JibberJobber.  He said the first order of business is to do away with the CRM tracking features that have become the hallmark of JibberJobber, and to create a job board for entry-level fast food restaurant workers. This puts a focus on what Alba used to call burger flippers.  Harris said:

“We are going to take the burger flipping job search to a new level.  We have done extensive research and found that other job boards aren’t filling this crucial need.  We will allow people to find openings at over one hundred different fast food chains across the United States (except Florida), in Spain and in South Africa.  With dominance in those markets we’ll move to other important countries, like Germany and Alaska.” 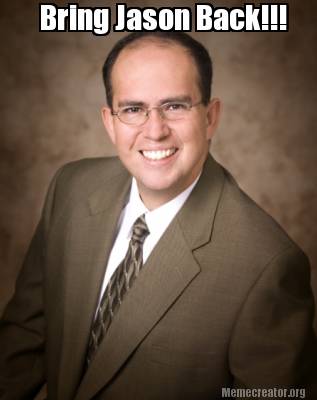 Harris’s strategic direction seems to make no sense at first glance, but if you consider how job boards make money, focusing on corporate sales and neglecting job seeker needs, it’s clear he can turn JibberJobber into a multi-billion dollar powerhouse.  Perhaps Recruit Co, the same company that paid one billion dollars for Indeed.com (“Wowzers! That’s a lot of money!” exclaimed Harris, as his eyes bulged with excitement), would consider buying JibberJobber with this new corporate focus.  “After all, it seems companies aren’t paying Monster much anymore, so they need to spend their hiring budget somewhere,” stated Harris. “LinkedIn can’t be getting all of it.  Wow, really one billion dollars?”

Harris said he will spend the next nine months on the road raising funds from savvy investors for this new chapter of JibberJobber.  “Investors will invest in pretty much anything, so it shouldn’t be hard to find VC money pretty quick.  Jason played an important role in starting this business, but now it’s time for smarter management to take it to the next level.  It’s going to be an awesome ride!”

Upon hearing this news, career coaches are in an uproar. Some have put “Bring back Jason” on their websites, while others have declared they are leaving the industry all-together.  Elizabeth Smith, a career coach in Wisconsin, declared she is going on a hunger strike until Jason comes back to JibberJobber.  “Or at least allow me to continue using JibberJobber as my business CRM, even if Jason doesn’t come back!”  She seems to be irate that her productivity tool will be switched over to a burger flipper job board, although concedes that maybe she might need to use it in the future.

Alba could not be reached for comment.  We heard he was busy working on his own JibberJobber account, and is busy scheduling informational interviews and finding networking events to attend, so he can find his next job.

Clearly, there are bright things ahead for JibberJobber.

26 thoughts on “Breaking: Jason Alba was laid off Monday Night”