A few weeks ago I was presenting to a bunch of job seekers and, as usual, had some books to hand out.  I don’t have a polished way of handing them out (yet), and sometimes I forget to get rid of them all.

At the end of the presentation I was standing at the front of the room, talking to people, enjoying the networking environment, and I looked down to see the last, lone book on the desk.  It stuck out since it was bright blue.  It was just sitting there.  My thought was:

If someone would just ask for this book, I’d give it to them!

All they had to do was let me know they wanted it… I didn’t want to give it to someone who wouldn’t be interested in it… just ask, I thought!

I read the article thinking it had to be a hoax, and that some papers got gamed… perhaps that is the case, but it seems to be quite real.

What happened? You can read the awesome story at The Telegraph, and BBC News… in summary, a six year old kid (Sam Pointon) applied, via letter, for a job to replace the retiring director at the National Railway Museum in York (UK).  The letter is adorable… check it out: 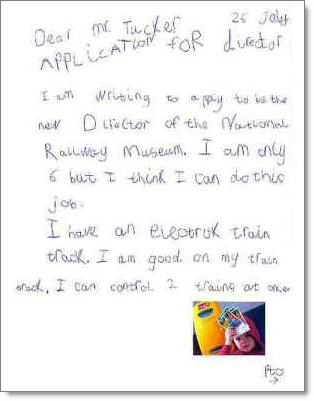 You know what this six year old did?  HE ASKED!  He simply asked! (go here to clearly see the content of the letter)

The person who would have asked for that book would have gotten it, because the timing was PERFECT! I didn’t want to bring it back home!  I wanted to give it to someone, but I missed my chances, and I was about to have to … ugh, take it back home!

Are you ASKING for time to discuss industry issues with peers (aka, asking for informational interviews/meetings)?

Are you ASKING for introductions to key people?

Are you ASKING “who do you know who works in my industry?”

Are you ASKING friends and family for help, or advice?