On my JibberJobber user webinar I share a lot of job search, networking, branding and other career management ideas I’ve picked up along the way.

One of my most favorite mini-ideas is this:

Same with sales leads…. this is the part about networking that can be hard… always asking “do you know someone that _________?”  It could be someone from a certain company, or industry, or that meets a certain profile.

The frustrating thing was keeping track of the breadth and the depth of your network… if I’m networking a lot, HOW do I keep track of all of the third and fourth degree contacts?  Or, the SEVENTH degree contacts??

Anyway, I had an experience two days ago that helped drive this mini-idea home. 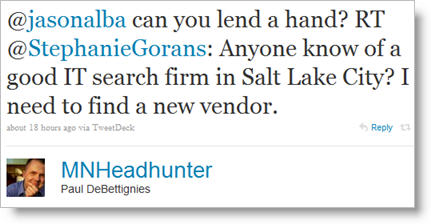 Here’s what this looks like… the number behind the name is the Degree of Separation TO Stephanie (not to me).

Stephanie asks Paul (1) for help.   Paul doesn’t know but he asks me (2).  I don’t know the right answer but I referred him to Robert Merrill (3), who knows everyone in this space.

Robert will probably give Stephanie a number of names that he recommends, which will all be 4th degree contacts to Stephanie.  She might need to drill down more to a deeper level, but she is getting close just because she asked Paul.

If you aren’t asking “who do you know” of your network, you are missing out on really getting to the right person… you have to drill down.

3 thoughts on “Networking: How “The Fourth Degree” Works”