Every once in a while I hear the negative about personal branding. I’ve seen blog posts from really big/influential (in their space) bloggers who say that “personal branding” is a crock.

Here’s a thoughtful piece called Personal Branding RIP by Mitch Joel, something of a god in the digital marketing space.  Make sure to read the comments, which are very good. 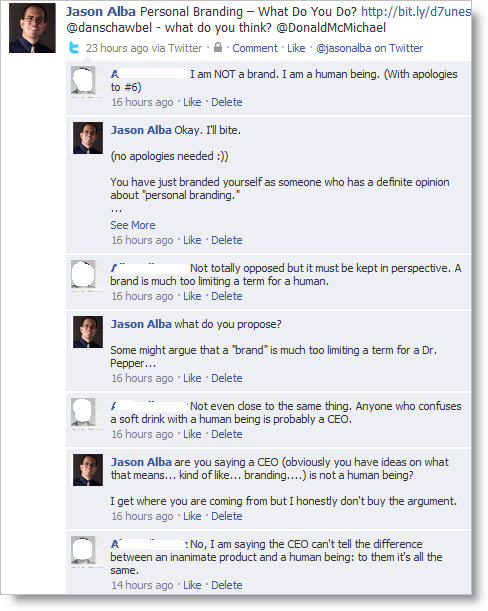 I know some people think that the term “branding” or “personal branding” is not the best term for what we’re talking about…. I don’t really care what you call it, though, you have a “personal brand.”

I use that term because it’s the most acceptable term, and I think it’s here to stick. I don’t care as much about the term, though, as the concept behind it.

You are known for something.  Some people have a personal brand that is “on purpose.”  That is, they strategically work on it and know how to define it, and help others understand what it is based on what they’ve thought about.

Others (many of us) have a personal brand that just kind of happened.

Like that guy at work who always gets out of work.

Like that guy who doesn’t say much but is 1,000% dependable.

Like the lady who makes THE BEST powerpoint presentations.

Like the guy in school who always got an A, and who you wanted on your team project.

Like the antagonist, or the peace maker, or the bully…

These are examples of unintentional personal brands.  They just kind of happen… you do your thing and people know you for it.

Yesterday’s post was an example of a guy who has done an awesome job of defining, intentionally, his personal brand.

Perhaps personal branding doesn’t matter to you right now.  When I was the general manager of a software company it didn’t matter to me… because my assumed brand was very strong.

But when I became “Jason the unemployed guy,” and the assumed brand of “general manager” went away, I found myself in a bad place.  It was time to create my own personal brand (even though I hadn’t heard that term at the time).

What about you?  Is your brand intentional or unintentional right now?

More posts that go into the semantics of “personal branding”:

Why I Hate the Term “Personal Branding” (read the comments!)

7 thoughts on “Yes Indeed, You Do Have A (Personal) Brand”