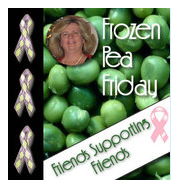 Social networking. It’s a funny thing. How much is too much, what about digital dirt, and what about all of the private people out there? I don’t have any answers, but I do have opinions. Today we’ll take a detour from the normal issues so I can share something that has been unfolding over the last few weeks, and exemplifies how social, and personal, social networking can be.

You may have heard of a blogger named Susan Reynolds. She was diagnosed with breast cancer this month and is having surgery today. She started a blog called Boobs on Ice, and talks about how she used a bag of frozen peas to, well, here it is in her own words:

To keep bleeding down & relieve pain I’d need to keep things cool. Traditional ice packs are hard and heavy. As much as I try to be a good sport I’m not into having a brick sitting on my chest.

Enter a bag of frozen peas.

I tucked it in my bra, took a picture, and was ready to tell the story later that night. That bag of peas added a touch of lightness to what could have been a sad and serious tale.

I found out about it on Twitter. You should see what’s going on today in Twitter… everyone has peas as their avatar. I don’t have the grapics skillz so I just “borrowed” one (I hope it wasn’t from Lane Hartwell ;)).

It really has been amazing to watch all of the people rally around Susan…. what an amazing show of support. Twitter is green. TechCrunch wrote about it (that is a feat). Bloggers all over are writing about it. Dozens of people are giving up billable hours to support this cause, give moral support to Susan, and even donate to the Frozen Pea Fund.

Going back to social networking, this is really what it should be about. People. And people helping people. Thank you to all who have proven that we are indeed not alone, there are many good people in this world, and the internet can be used for good!

You can do a quick blog search in Google to see what comes up for Susan Reynolds, but here are some posts that really stood out in my mind (the titles are immensely powerful, and show what can really happen with social media):

WhyMommy & give Peas a chance

web friends can be real friends.

The Power of Community

Peas in a pod?

Social Network? It’s Like Two Peas in a Pod

Photo of the Day PEAS!

For Those Who Pea on Social Media

And, to learn more about Susan – Jim Long chats up Susan Reynolds – Peas and social networks

God bless you Susan, and thank you to all of the superstars who have stepped up to the plate and used social media this way!

5 thoughts on “When Social Networking Gets Very, Very Personal (in a good way)”