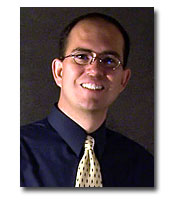 Since I started JibberJobber I have been getting various criticisms. It’s actually really good because most people don’t criticize my and my projects (or at least, then won’t tell me what they really think). Only when someone says “Jason, do you realize that xyz sucks?” that I come down to earth a little and think about changing something that I thought was brilliant.

Such is the case with my professional head shot. I had never considered getting a professional head shot until Peter Clayton asked for one. So I called the two photographers that I knew (I tend to do business with people I know and like :)) and was able to schedule a short-notice photo shoot with one. We spent a couple of hours shooting various poses, with different shirts and suit coats and ties. For some reason the picture on the right is the one that I liked the most.

Right after the interview with Peter Clayton I was asked for a professional photo for some articles that would be posted in a job board network across the country, and I was grateful to have it ready. Shoot, I really like the picture on the right! But not everyone does – here’s two comments I’ve received in the last few weeks:

Quoted from an e-mail: [On] the subject [of] personal branding. Itâ€™s time for … you … to get better photos. … yours is too darn dark and gloomy. Was it a Goth phase you were in? You want to brighten peopleâ€™s days, be the knight in shining armor for their job search… . Your creative and innovative (donâ€™t worry, I wonâ€™t tell anyone). Your photo needs to reflect that.

And, from someone else: And, get a better picture. I think the shirt is too dark. Look at Kent B’s picture. If I looked like that I’d be a big exec. When you shrink the pic it looks even worse darker as a thumbnail. (this is from John Reinke, sent after I put my picture on an e-mail newsletter)

The first was a great e-mail because I have a strong relationship with the person who told me, and he said that he needed to change his picture also. I was amused by the way he told me to make it more professional (Goth???), at the same time cringing that I’d have to pay to fix something that I didn’t think was entirely broken (or, that bad).

Oh well. My book publisher said the picture is TOO SMALL, and I can’t find the disk with the originals. So I’m headed out this morning to meet the other photographer and get some non-goth pictures. Wish me luck.

And now, about you. Do you have a professional headshot? I had no idea I would need one… but having one has been quite handy. If you are interested in your personal brand it seems this is something that should be on your list of things to do!

10 thoughts on “My Picture Sucks”