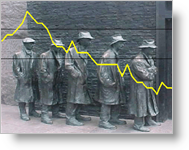 Wow, I didn’t expect people to comment on my rant/whine/post from yesterday about the unemployment rate. The truth is, it’s been something that has bugged me since I started my job search. Because it was so low, people would be surprised to hear that I was *still* looking for a job. Get it? It provided proof that if I couldn’t get a job, the problem was me, … because this economic indicator showed that anyone that really wanted a job could get a job.

Plus, it didn’t help that I was still living with my own strong stereotype that if you couldn’t get a job it was because you made bad choices, sucked, or just weren’t up to snuff – it’s what I believed and now I had to apply those ideas to my own situation.

At 32 I felt I was too old (they could hire kids from college for cheaper) and too young (I didn’t have the decades of experience and wisdom of the baby boomers). How’s that for age discrimination? There’s gotta be something out there that says that GenX has been lost between these other two generations 🙂

Anyway, as usual, the comments are smarter than the post. Here’s some gems I picked out:

From Daniel Sweet, who is a recruiter and has been at this job search stuff a lot longer than I have, he says my logic is a little messed up (or at least, he redefines some stuff I was trying to communicate) and emphasizes that we need to keep our skills current and make sure that we market ourselves properly.

Katie Konrath has a really positive take on all this stuff – which is refreshing to hear from Gen Y (usually the stuff I hear from Gen Y has to do with entitlement and bucking the system) – she says that it’s true that they are expecting to have 10 – 15 career changes (mind you, that’s not job changes… !!) and that there are really lots of opportunities out there, even though there isn’t really job security.

David Armstrong comments on job happiness (where does that come up in government metrics?), a real job search (that is for another post… perhaps next week!), and relationships. And – thanks a TON for sharing JibberJobber with a large group a couple of days ago!

Heather Mundell talks about our attitudes and succeeding even though the numbers say perhaps we should (divorce rate, etc.). Very cool strategy Heather!

Scot Herrick talks about staying in a big company and the changes that you’ll see there, with reorganizations every 6 to 10 months. It’s really interesting perpective considering I can’t get a job at a big company and honestly, his comment doesn’t make me want to :p

Finally, “M” brings up two points that really, really bug me. First, as I mentioned in the post yesterday, the unemployment rate is subject to garbage-in-garbage out problems. M says that the unemployment rate doesn’t take into consideration those that are nut currently filing for unemployment (where the unemployment benefits have run out). This is really common, I think, as I know lots of people who are well past their first six months of job search, or they haven’t found “the one” yet and continue to look. Second, M says that just because you “get a job” doesn’t mean that it’s going to work. I was not in a position financially where I could go to general manager of a software company to a burger flipper or a Wal-Mart greeter. Not because I was too proud but because I could not afford to make $24k a year.

Of course there was talk about age discrimination, career management, and other stuff. The comments really were quite insightful – thanks to all that contributed to the discussion. I guess this boring topic (it was boring in college :)) really is quite interesting!