I’ve been actively networking for about a year. I’ve met some amazing people that have been in transition for the normal reasons (company downsize, strategic change, etc.). And I mean amazing – these people have amazing resumes and abilities.

Of course, networking is the best and most common way to find a job, right?

Well, how come so many people are… still… networking? Some have been actively networking for more than a year.

Does it really work? Or is all this talk about networking just another fake statistic that applies to such a big demographic that it isn’t applicable to most people (like the unemployment rate).

When we network are we doing something as blind as these ducks, following one another (who says the leader really knows what’s ahead?)? 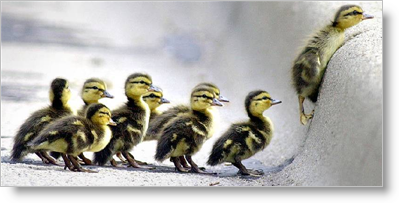 Please share your stories or thoughts on networking – is it a fad, is it bunk, or is it really something we should be investing our time in.

29 thoughts on “Does Networking Really Work?”