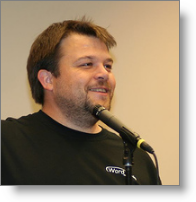 Phil801 wrote a lengthy blog entry about “social networking” and how it could add value to an employer (Social Networks and Corporations). In short, the idea is that if an employer could take all of his employees and tap into the power and resources of their own networks, what couldn’t they solve? The employees might not have the expertise needed to solve a specific problem, but they might know someone who knows someone who knows someone that can solve the problem.

A mutual friend and corporate recruiter wrote a follow-up post here: Pay Per Click Consulting? I think most companies will be too chicken to do what Robert Merrill suggestions, but he’s talking about supply, demand, capacity, and the free market, and how a strong network ties into all those.

Here are my thoughts:

I think that this is a great idea, and that everyone serious about career management should evaluate what they are bringing to the table. I imagine that Phil and Paul Allen (the lesser) would say that if any of the negative points that I bring up are true about where you work, then GET OUT and get into a better environment!  I totally agree with what I assume they would say 😉

Prepare yourself for that next great company, and increase your job security by having a huge, well-connected network to tap into.

2 thoughts on “What’s your value-add?”