Granted, I’ve never owned a barn. Nor have I ever harvested hay. So I’m not sure what losing it all to a barn fire feels like. But I can imagine.

I posted this November 2nd: 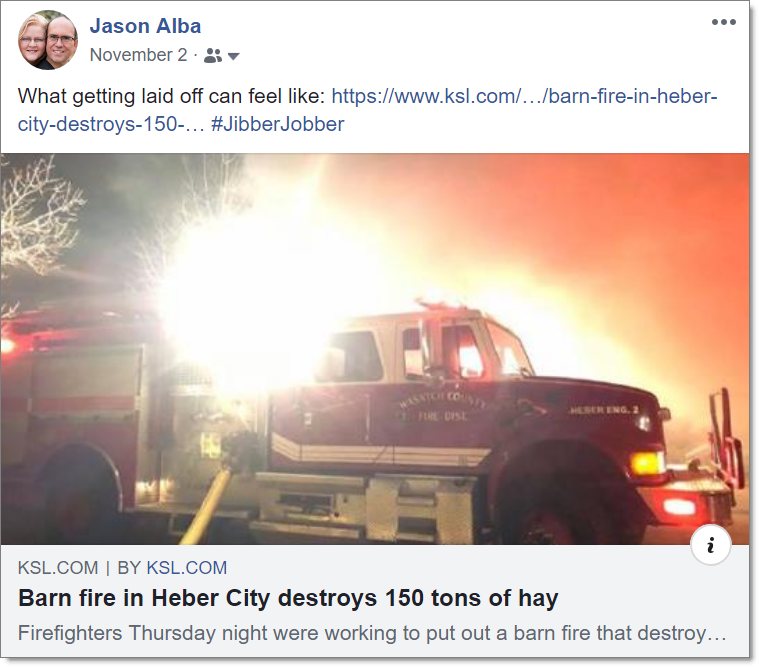 I can imagine the work and investment it took to plant and cultivate 150 tons of hay. The hope and anticipation… what does 150 tons of hay mean for your family? For your future? The work of harvesting the hay and stacking it neatly in the barn. A job that could be dangerous and take more hours than I can imagine.

The work. The investment. The hope. The vision. The chance to make a difference.

All of it goes up because of a barn fire. How did it start? Could something like this ever be 100% prevented?

I read this article about a week after I got notice that “your last day with us is on November 30th.”

Every part of the vision I had for my job, my contribution to the company and to the customers, just got set on fire.

Of course, I had an idea this could be coming. But until the words fall from their lips, it’s just my nervous inclination to allow myself to think of the worst. I had been unsettled for a couple of months since my boss, the VP who hired me, had left. Then, the executives questioned the validity of the program… which meant that my future at the company was likely on the line. They said that even if the program were terminated, they’d find a place for me in the company. I heard that from people who had been at the company for years. “We just don’t lay people off.” “Layoff is not in our vocabulary.”

I was told that they hadn’t laid anyone off for four years. And here I was, the lucky guy who got to be “once every four years.”

I was and am upset for a host of reasons. But back to the barn fire… I put a lot of work into my job. Since February, I caught my boss’s vision, and we worked hard all the way until he left to move towards the vision.

And then, the fire came and burned it all down.

But what really hurt was when my vision was burned. I wasn’t going to be able to change the world, in that way, with that opportunity, anymore.

And that was one of the most painful parts of this layoff.