Yesterday I sent an email out to a bunch of BambooHR customers who are interested in what we are doing in Thought Leadership… and one of them wanted to connect on LinkedIn.

The only problem is, my LinkedIn Profile didn’t have anything about BambooHR… it was very JibberJobber-heavy!

I’ve been avoiding putting it on LinkedIn because I wasn’t too keen on sharing what we are doing (still in the works!), and because I didn’t want to start getting messages from recruiters who were looking to poach BambooHR employees. Part of me was probably a little nervous about this not really being real… how weird is that?

But, it was officially time to update my Profile.  I didn’t spend too much time on it… here’s what I came up with (because the email I sent out went to quite a few people, I had to have something to show that I really was with BambooHR): 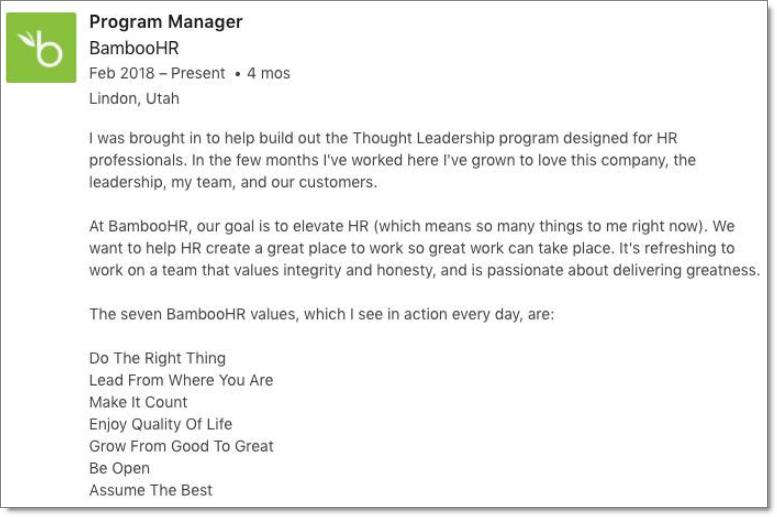 My good friend, who I’ve had a lot of lunches with and we talk a lot about our businesses, wrote this on Facebook:

Based on this post, we are convening a committee to drum you out of the entrepreneurial corps. It was a good run, but ultimately your true intentions, that is to find a job, finally won out.

Here was my reply:

If you reread my posts from the last 12 years, you’ll pick out the idea of “multiple streams of income.” A job is an income stream. For most, it’s the main stream. It was time for me to get a job for various reasons. One of the big benefits is that I’m in the marketing team, and marketing has always been a weakness of mine… so I’m in meetings and rubbing shoulders with people who are helping me get marketing better. Also, one of the reason I was brought on is because of my entrepreneurial background… I think they wanted someone to be a bit of an intrapreneur. This job is unlike anything I’ve seen before, and the entrepreneur spirit, drive, and thinking is a critical part to the job. (I know you get all this, but I wanted to respond for people who don’t know me as well and really did think I was giving up on JibberJobber, which is still alive and well.)

Getting a job was a really hard decision, and my wife and I talked about it a lot and we put a lot of thought into it. In addition to money, I needed to change the scenery a bit… I have been doing JibberJobber for 12 years. It’s been a super run, and we are still running (thanks to my awesome team), but I needed a change. I had no idea that the change could be so good. And yes, adding another revenue stream was great. When Pluralsight slowed down (read: stopped) for me, I had a lot of excess time and mental capacity, and needed to put it somewhere. And the impossible happened: Jason got a job.

Should I be drummed out? I don’t think my independent and entrepreneurial thinking will ever get drummed out. I sure hope not.

3 thoughts on “It’s Official Because It’s On LinkedIn!”