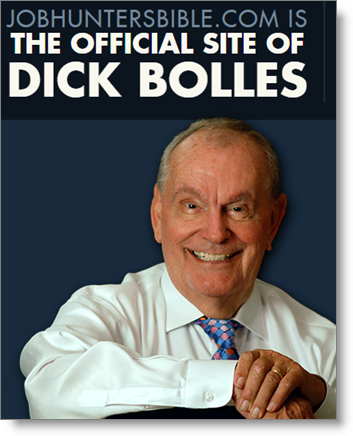 Dick Bolles passed away a week ago. He had a profound impact on me, helping me understand my message better. Below are ten things I found to be interesting about Dick Bolles:

I am about six foot tall and he seemed to tower over me. Maybe he was my height, but he seemed to be a giant of a man. However, he was so kind and gentle that I didn’t feel like he was physically imposing.

Dick Bolles was an ordained Episcopal minister… until he quit.

I knew the first part, but only recently read about the last part. Apparently, there’s a rule that you can’t get married to a fourth wife, after three divorces… Dick didn’t take this well and tried to fight it, then just renounced his ordination to marry the lovely Marci (who was at lunch with us).

Dick Bolles, for many years, did all of his own writing and editing.

He told me one of his agreements with the publisher was that they would not touch his finished product at all…. that means no other editor would change anything. In our interview (see yesterday’s post) he said that that had changed towards the end, but for many years it was 100% Dick Bolles.

He was Mensa-level smart. He was an Harvard alumnus where he studied physics, and an MIT alumnus where he studied chemical engineering. He was literally a member of Mensa. When I had lunch with him he was in his mid-eighties, and he was one of the sharpest people I had ever talked to. He was fast, and could talk about a breadth and depth of topics, without skipping a beat.

Dick Bolles’ brother was murdered in 1976.

He was an investigative reporter and was investigating a very rough crowd: the mafia in Arizona. Shocking? Very sad, and I can imagine that it was devastating for Dick to go through. The legacy of his brother, Don Bolles, lives on amongst reporters. He was uncovering a nasty part of society, and paid with his life.

Dick Bolles stumbled onto helping others in job search… it’s not what he set out to do.

The title of his book came from a conversation he had with someone who said they were going to quit their job, and his response was “what color is your parachute?” Meaning, if you are going to do something so risky, what’s your plan? Have you even thought about the consequences of quitting?

These were small, intimate groups of career professionals, getting almost one-on-one attention from Dick. I wish I would have done one of those… I’ve only heard about them from some of my colleagues. To have someone of his status invite career experts to his home for so long, I thought, was really cool.

for almost 50 years straight.  The dedication to this one book had been a life passion for him.  He passionately studied current events, reading papers, listening to experts and job seekers, and then would incorporate the latest and greatest in strategies, tactics, and tools into the next version of his book.  Almost 50 years… that’s really quite remarkable for someone who could have just outsourced it many decades ago.

Dick Bolles was an international speaker,

and obviously highly sought after.  Again, he could have just rested, and enjoyed a comfortable lifestyle, but he got on plane after plane, even for very long flights.  He was a man who clearly believed in his mission of helping people.

I only met Marci, and know nothing of his previous wives. But the way he treated her, listened to her, looked at her… it was love and respect.  At our lunch I learned about why and how they met, and how she literally saved his life… hearing him tell the story was like reading a romance novel (I assume… I’ve actually never read a romance novel).  His love was tangible. And so was hers. It was refreshing to witness their interactions.

Of course.  Service and action.

Dick Bolles: a great man who fulfilled a great mission, and really impacted the world.