It’s interesting to read opinions about how to make money, how to get rich, the unjustness of people being wealthy, the abhorrence of people hording their wealth, what people should do with their money, what the responsibilities of wealthy people are, what the responsibilities of poor people are, luck vs. hard work, silver spoon and entitlement vs. worked my way up from the bottom, etc.

Opinions are across the board.

A few days ago I merged my pondering on money with my pondering on something else: vehicle maintenance.  Specifically, checking the oil level in my family’s two vehicles. I’m not very good at it, and more than once I’ve had a mechanic shake their head, look at me with that look of shame, and say “you had no oil in your car!  You have to check it!”

I’ve worked on being better, and I think about oil in my car more than before.  Oil’s purpose is to lubricate the rest of the engine so that parts don’t grind and ultimately destroy the entire engine.  A costly mistake, for sure.  Without oil, or not enough oil, bad things can happen.  The integrity of the engine can be compromised.  The engine might not run as well, it might be loud, it might be costly (reduce gas efficiency), it might pollute more (I just made that up, I have no idea).

Not Having Money Has Repercussions

I was thinking that money in a family is like oil in an engine. If you are in a position of not having money regularly, well… you know what happens.  Not having money can quickly lead to stress in yourself, your marriage, with your kids… creditors coming after you, bank fees for NSF (insufficient funds), higher interest rates on credit cards and overdrafts, poor eating and shopping choices, etc. Your family doesn’t function as smoothly as if you didn’t have that problem.

I was chatting with a friend of mine about not having money and he sent me this image:

When I first looked at it I thought “cool, he got paid and then went to the beach!”  But then I looked a little harder and realized that the beach (or, the rest of the month), is him finding fish to eat, by a dirty shopping cart, and without fishing gear.  “Payday” is when you are well-oiled, the “rest of the month” is when you don’t have enough oil to function properly.

Here’s another image about not having money he sent me: 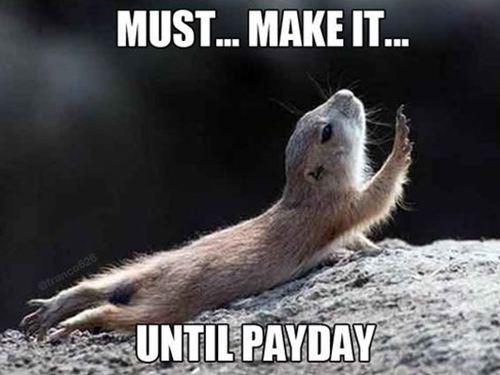 This is how I felt when I was out of a job.  Not on day one, but as my massive savings of $1,000 dwindled (both cars were in the shop the Saturday after I got laid off, amounting to almost $1,000), and as I realized that the job search would take longer than I thought it would, I felt like that, out of energy, barely going to make it…

This feeling of being out of money sucks.  I know it does.

I also know that money is something that we can get if we want to get it. I wrote a book on alternatives to a real job, which include things that many of you probably wouldn’t do.  A day care, a dog walking business, painting house numbers on curbs, etc.  Nothing glamorous, especially if you did your time at a university, but in each of those alternatives I found people who made more than $5,000 a month doing those things.

Maybe getting a job is elusive. Maybe we’re not cut out for it.  But that doesn’t mean we can’t have, or earn, money.

Having a healthy relationship with, and attitude towards, money, is critical.  Once we get it, and abide by the principles, we are prepared to make decisions that will position us to have a lifestyle we are okay with.

The Richest Man in Babylon. I read this book many years ago, and honestly can’t remember what the storyline is, or the main learning points, but I remember it helped me understand money much better than I did before.

Dave Ramsey Millionaire Hour. These are snippets of Dave’s show where people talk about how they became a millionaire. It is refreshing to hear people talk about how they accumulated wealth… from “saving coins” to blue collar worker who just managed his money really, really well (while not making much money).  These stories are really cool because they are of people who were just smart with their money, and very stingy with their spending.  Stingy, by the way, doesn’t have to mean Mr. Scrooge.

Look, I’m not saying we all have to be wealthy to be happy.  We don’t even have to have a lot, or much, money.  That has been proven to not provide happiness.  What I’m saying is that not having enough money STINKS. And we can do something about that!

1 thought on “Having Money vs. Not Having Money: 2 Helpful Resources”