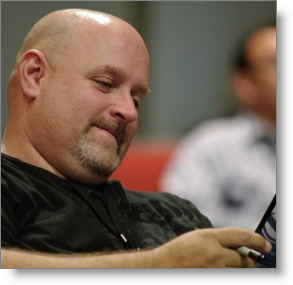 Thom Allen was one of the earliest friends I met when I moved to Utah.  I’ve networked with Thom over the years and we’ve consistently had a funny conversation: “Thom, explain to me again exactly what you do?”

Thom would always tell me something cool.. but the more I learned about Thom, the contracts he had, his professional passions, the less I understood about him.  I guarantee that some of you, reading this blog post, have the same issues communicating your personal brand.  Let’s take Thom’s blog post and talk about some of it:

Speaking of the first person Thom met at a particular networking event, he says: “In the software development world, Alistair is the rock star God of the agile methodology.”  I love that Thom writes it that way.  He makes it clear that Alistair doesn’t have a branding problem, unless of course Alistair doesn’t want to be known as the “rock star God of the agile method” in the entire software dev world.  That’s a powerful statement and observation, and something that some of us want to shoot for: a very high level of clarity and accuracy of how others talk about us.

Thom writes, “At the end [of my conversation with Alistair], he started to ask me what I did. First sign the night was going to be rocky.”

Uh-oh.  If you are going to a networking event, and you aren’t prepared to answer the most common question you’ll hear, multiple times, during that meeting, you got a problem.  It’s definitely going to be rocky.

Thom says that he shook hands with various guests, “many who I knew,” and Thom writes “Most asked me again, what I did. I wondered where these people had been. Why don’t they remember?”

Does this sound familiar to you?  I hear this frequently. It’s why I wrote the post Why Tell Your Network What You Do When They Already Know What You Do?

Thom continues with his networking story, and says he was surprised that he was introduced to a small group of networkers as he was “connected to everyone.”  He writes “it feels unnatural when someone says that about me.” He later asked that same friend “why do I have such a hard time getting people to remember what I do?”  The friend’s response was awesome:

Thom talks about having an elevator pitch, which is something that he says he told others to do, but he hadn’t taken his own advice.

Look, I think most elevator pitches stink.  When I present, I say 99.999% of elevator pitches I hear stink.  BUT, not having a pitch allows others to misinterpret who you are.  Why didn’t Thom do that?  The same reason many of us don’t. He writes:

“I guess my failure to successfully convey what I do stems from years of not wanting to be defined by my work. So I kept it vague. But as a business owner I can’t do that anymore. I need to clearly define what I do. There’s no way I can network without being able to convey what I do. It’s not the part I want to be, but it’s the part that I need to  be.”

YOU need to get here! You need to have enough frustration that you choose to finally narrow your brand messaging down so people (including yourself!) understand it, and can even easily communicate it to others.  Yes, you can have a breadth of passions and interests.  But at some point you also have to help people understand what they should understand about you.

Are you ready yet?