I saw this article and thought “this is going to kind of be boring, and a one-hit-wonder kind of a story).  Then I read it and was really quite intrigued.

When people think of social networking, especially in the career space, I think they think of LinkedIn (people are getting tired of their lame policies and changing free features to premium, not to mention their walled-garden approach to the rest of the world), Facebook (many are still confused about the whole personal/professional thing), and Twitter (was useful a few years ago, then the pop media and pop stars came and it’s become a polluted place of yuck, with very little interaction (compared to the good ol’ days)).

No one thinks of using Instagram to get a job, do they?  I wouldn’t have, until I read this: No Resume, No Cover Letter — Instagram Scored the Job

The problem with thinking Instagram is going to get YOU your next job is that this story is about a certain person (Clark Walker) in a certain industry (profession: barber) in a certain place (NYC, of course!).  Will this work for an attorney or accountant, or for someone in Podunk, USA?  It is not that likely, methinks.

But it sure worked for Clark, and apparently this one-time med school student is living his dream, which is awesome. 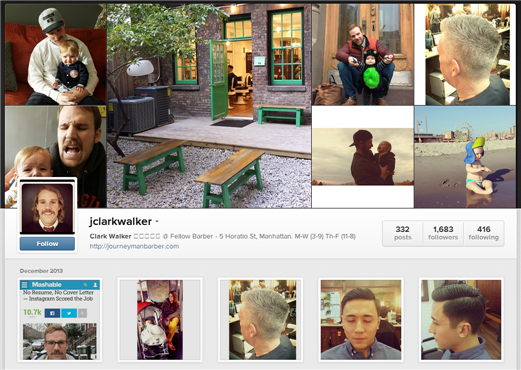 I wrote a post about LinkedIn’s competition, where I basically said it isn’t ONE competitor that is going to take LinkedIn down.  It won’t be Facebook, Twitter, or the other biggies (instagram, snapchat, pinterest, quora, etc.).  It will be that people are bored and not getting their needs and wants met by the one-size-fits-nobody approach of professional networking.  Recruiters have already figured this out and instead of trying to harvest conversations and activity in LinkedIn, they are finding out where their target audience is hanging out and going to them there.

Here’s my post about LinkedIn’s competition: Death By A Thousand Papercuts (aka, LinkedIn Competition): Github. Here’s a more indepth take on TechCrunch: The Biggest Threat To LinkedIn: The Power Of Many, Not One

Kudos to Clark for living the dream, and using tools to help make that happen.

What does this mean FOR YOU?