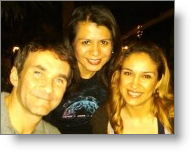 Twitter is … weird.  Yeah, weird.  I currently have 11,409 followers, and I wonder how many of those followers are spam and fake accounts. I rarely look at the home page to see what people are writing about (I used to, all the time) because it’s so NOISY.  Too much crap to wade through.

Having said that, I’ve gotten immense value out of Twitter. I put up a LinkedIn Question a few weeks ago asking: Twitter in the job search? I say: not yet. What do you think? I got some passionate replies telling me that YES, Twitter is all that, and other replies saying no way, pick up the phone instead.  Terrific responses.

The irony, for those so passionate about how Twitter is the best things since sliced bread, is that I’m not a Twitter hater… I even did an awesome video on Twitter in the job search. I think it’s a terrific tool for job seekers…

Let me share one of the coolest stories I’ve heard in a long time on how people are getting value out of Twitter (this isn’t a job search story, but it is a networking story).  It’s a terrific story about two ladies who really want to meet celebrity author Keith Ferrazzi in Guatemala… you can read the entire story here, on Keith’s blog.  Here’s the short of it:

Keith was in Guatemala to look at some charity opportunities (read more about Keith Ferrazzi’s charity work here) and let his readers/audience/fans know (Keith’s Twitter account). Sara and Suzette found out and were using Keith’s tweets to try and figure out where he was, hoping to run into him.  Finally, Susette tweeted to Keith asking if she could buy him a drink.

Keith saw that, replied, and the rest is history!  (read his post to see how cool the dinner was)

This worked because Keith was (a) on Twitter, (b) using Twitter, and (c) comfortable with Twitter.  There’s something about communicating with someone through a channel that they are comfortable with.

What’s interesting is that neither Susette nor Sara have done “all the right things,” as far as what others are saying you have to do.  They don’t have many followers, they don’t have bios or websites or links so you can learn more about them… they haven’t tweeted that much.  But they still hit grand slams… just by using the tool.

Not all of your target contacts are on, or use, Twitter.  However, I would check to see if they are.  I’ve communicated with other untouchables through Twitter and gotten further than if I would have just sent an email.

Don’t discount Twitter as a networking tool.  I don’t suggest you go crazy with it (my video shows you how to get value out of it – whether you have a Twitter account or not), but use it like all of the other networking tools you have access to.

2 thoughts on “Twitter as a Job Search Tool – Keith Ferrazzi, Sara and Susette”