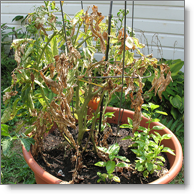 Many people “network” into their next job, right?

And we believe it.  It sounds good.  It feels good.  Everyone says it. It must be true.

Then WHY isn’t networking into your next job WORKING??

I’ll give you two reasons why networking might not be working in your job search:

Think about planting a tomato. When do you plant the seed?  What do you have to do before you can get the harvest?

It’s a long process of watching hardly any progress.  It takes time, and care.  Sometimes, you have to go out in the evening and cover your poor little tomato plants or else an overnight freeze will make all of your efforts go to waste.

People who plant tomatoes know what they are getting into, and they have a vision of what they’ll get when it’s all done.  They take the time to do what needs to be done.

I think we, as networkers, DON’T know what we are getting into, and our visions are unrealistic because we don’t know what needs to be done.

You need to NURTURE RELATIONSHIPS.  This is slow.  And we are impatient. And that is why networking sucks in a job search.  Because it doesn’t necessarily produce overnight results.

It’s not just about having a slick business card and going to job search meetings.  It definitely is not about arriving late and leaving early (like I did, because I didn’t want to network with losers).

Networking is not about adding a ton of people to your “list.”  Whether it’s adding more people to LinkedIn or JibberJobber, it’s not just about getting more names and phone numbers.

Networking is not about that proverbial “we should do lunch sometime,” … that “sometime” that never happens.

Networking is about nurturing “intimate relationships.”  When I realized this (as I read Never Eat Alone), EVERYTHING changed.  Everything.  It was still a nurturing process, but EVERYTHING changed.  Networking was more fun, and definitely more rewarding.  I focused on helping others, and was able to give, and serve, and get fulfillment as I developed intimated relationships instead of focusing on “is this person going to be able to help me, or am I wasting my time?”

Many people I meet in the job search just don’t get it.  They do not understand what networking is.  It’s like planting a tomato in the wrong soil, or not watering it, or not giving it appropriate sunlight… if you don’t know what you are doing with a tomato plant you probably won’t get tomatoes.

If you don’t know how to nurture intimate relationships you probably won’t find your job through networking.

Both situations will leave you asking “but what did I do wrong?”

I’m sorry that you drank the “networking kool-aid” and thought networking was going to be your quick-fix, and are now very discouraged because you see no results.  Perhaps you understood networking to be something different?

If so, go to your library TODAY and get Never Eat Alone, by Keith Ferrazzi.  This book completely changed my job search.

While you are there, get Some Assembly Required by Thom Singer.  It is a great companion to Never Eat Alone, and has tons of tactical tips and ideas.

Does networking suck for you?  Why?