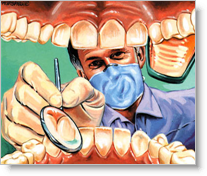 It started a few weeks ago, when my four year old daughter complained of a really bad toothache (the kind that makes crocodile tears flow), and cut short her trip with her grandparents.  We drugged her up and scheduled an appointment with a dentist for the next day.

As she was sitting in “the chair,” the dentist explained to me that he is seeing the quality of American’s teeth go downhill rapidly.  He said the main reason was the lack of dental insurance, which we used to have in abundance, and now not many people have it.  I’m sure the healthy supply of soda and other sweets doesn’t help, but his argument was that people used to come in for six-month visits regularly, since their insurance paid for it, but dental insurance started going away and people now neglect their regular visits.

The diagnosis on my daughter was not what we wanted to hear.  I was expecting to pay a few hundred dollars to fill a few cavities, but he said she required a “child root canal” or something like that.  Nothing sounds like money falling out of your wallet like “root canal.”

Turns out she got two of them, one for each side.  She’s only four and quite proud of these silver caps that cover the entirety of two teeth.  My wife feels guilty, horrible, as she never wanted to be “that mother,” the one who obviously let her kid eat junk and neglect her teeth (another stereotype, of course… hey, we’re human).

This put us back over $1,500.  Very expensive procedure, not to mention scary to have your kid “go under” with anesthesia.

I quickly made an appointment to see the dentist.  You know when you watch a movie about, say, spiders, you suddenly feel like you are covered with spiders?  I suddenly felt like all my teeth were about to fall out, or at least ridden with cavities.  I remembered every little pain or discomfort and was sure I, too, would have tons of cavities.  I would rather get them fixed now than have to pay for root canals later.

Guess what?  I hadn’t been to the dentist in about 5 years.  I didn’t go in the last year that I lived in Idaho, and haven’t been in the 4+ years since I moved to Utah.  When I told the receptionist this, she said they would probably have to do a deep clean which went under the gums, and they charge by the quadrant (in my mouth).  Charging by the quadrant sounds VERY EXPENSIVE, doesn’t it?

Long story short, I went in, scared (of pain) and worried (about money).  About 90 minutes later I walked out – they were amazed my teeth looked so good.  Not one cavity, and a simple cleaning and polish, and I was good to go for another six months!  I felt so blessed at that time, and glad that I had flossed and used Listerine faithfully.  Reminds me of a saying from a friend of mine:

Q: Do I have to floss every tooth?  A: only the ones you want to keep!

The reason I’m posting this is because I probably have some readers who are putting off critical things, like dental care.  Take care of it now, while it’s inexpensive (my trip, including all xrays, was about $200) and relatively easy.  Ignoring certain things is just asking for trouble.  I wrote about this last year in Water Damage Is Expensive – Don’t Neglect Your House, and should have taken my own advice!

8 thoughts on “Please Schedule An Appointment With The Dentist Today”