I met Phil801 a couple of years ago, and we’ve bumped into one another a number of times over the two years. He’s a short, stocky wrestler-type. I met him when he was employed, but just a few months later he had started his own company, and has since worked for himself.

He’s a software guy, and a visionary. He loves the mountains, has a large family, and used to have goats and chickens (not sure if he still does). Phil801 is a blogger, in fact, one of the bloggers who got me started blogging.

Of course Phil801 is on Twitter. And that is how I found out his daughter has cancer.

My heart goes out to Phil801 and his family. Not to sound sappy, but I cried yesterday as I read through his recent blog posts, where he is sharing the experience, and pictures. As a father, I can’t imagine the pain he is going through. Here is a picture of Phil and Serenity, in the hospital bed: 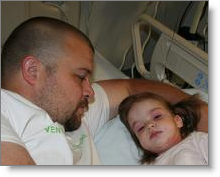 While Phil801 says he hasn’t really thought about the money part of this ordeal, it is something that has terrified me for over two years.

Phil801’s experience reminds me of the time I cut my hand open two years ago. I had been unemployed for a while, had no health insurance, and was long-past the time when the money ran out (or at least it felt that way).

I was also in the low part of my job search where there was significant despair… I *should have* landed my job by then, but no one was even looking at my resume!!

One evening, as I was trying to separate two frozen hamburger patties with a very sharp knife (dumb, I know), it happened.

I found myself leaning over the sink, washing my wound, wondering how I would explain how dumb I was. I was nauseaous, and wondered if it was because of the blood and gore (okay, it wasn’t that bad, but I was getting lite-headed), or because of the money.

As an unemployed chump, with no money in sight, and no insurance, it made me sick to think about how much this was going to cost.

That’s why I chose to use super glue instead of going to the doctor. I finally dragged myself to our doctor a few days later when I was sure it was infected (it wasn’t). He said to keep up the super glue treatment. And he didn’t charge me for the visit.

Otherwise that would have been a $80 visit. Stitches would have probably been a few hundred dollars. But what if something worse happened?

When my then-three-year-old fell off the bed and broke her arm, it was an excruciating $500+ bill.

What if there were something else? A skateboard accident for my son? Cancer, or some other very expensive health condition for any of us?

Accidents and illnesses have been a major concern since I got laid off, since we didn’t have that insurance safety net.

Luckily the government was kind enough to have come up with COBRA, but seriously, that is an absolute joke. How would I pay $700+ each month for sucky insurance coverage? I have heard others say they have paid over $1,000 per month for crappy COBRA coverage.

What do you do, declare medical bankruptcy?

It is scary. I’m not a pessimist but this is a huge issue that I don’t see a good resolution for anytime soon.

And for that, I’ll continue to live in fear.