I feel uncomfortable with these posts because (a) I’m not sure it adds any value to YOU, and your career situation, and (b) it feels like bragging, and (c) if I had a PR or Marketing professional on staff they would probably tell me to do it differently.

Alas, if I don’t do it I get dozens of e-mails from people saying “HELLO! Tell the world all the cool stuff that you are accomplishing!”

So instead of posting separately for each mention, I try and bunch them all together. And what better way to end this week and start February, but with a summary of awesome “in the news” mentions.

First, this is the second time that Sree included JibberJobber in his Sree Advice spot on wnbc Channel 4 in New York. It’s always fun to get hundreds of new signups from New York and New Jersey, as I picture them saying, in that NY accent, “How ya doin’?” Anyway, here’s a link to the video: 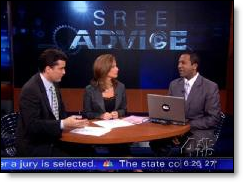 I should mention, with regard to the six degrees of separation thing, I had a neat experience with this. One of my good friends, Bill Sobel, master networking and media expert in NYC, heard that I wanted to thank Sree but I haven’t been able to get in touch with him. Bill wrote to me and said, “I know Sree really well! He’s presented at my marketing network groups!” Go figure – I had no idea that one of my close contacts was close to someone who has put me in the news spotlight! Lesson learned? Let your contacts know what you are trying to do, and you might be surprised who comes out and says “I can help you!”

Second, in one of my funnest podcast interviews yet I share wisdom and thoughts to a younger crowd. I’ve been following Chris Penn for a while, after getting introduced by Dan Johnson (thanks Dan!). We finally connected for a while to record this podcast – I would recommend you check it out, and if you know anyone in school, or who wants to go to school, definitely get hooked up with the Financial Aid Podcast site – they have awesome (legitimate) information on how to get money for school.

Third, I was honored to write an article for one of two local business magazines here in Salt Lake. I don’t do much locally, so this was a good opportunity to work on my local branding. I’ve gotten e-mails and maybe some business from it. The big surprise was seeing the article placed as a feature article, as opposed to one of those introductory half-articles that I thought it was going to be.

Fourth, I had a local radio reporter call to see if he could come to my office for an interview on “when your personal and professional profiles collide.” It actually turned out well, much better than the first time we interviewed, and I’m very thankful for the opportunity. It aired on the morning commute so I had a number of people say “I heard you on the radio!” These are people who still think I’m … um, in a job search :p

That link goes to the audio…. the transcript is here. I’m amazed at how stupid the comments are. I can’t even describe them, you’ll have to read them if you want to see how many people think that posting pictures on MySpace and Facebook is “off-limits” for HR, recruiters and hiring managers to find. More on that later!

As a bonus, when he came out to interview me, he saw my neighbor’s awesome snow fort. My neighbor took four days to put this together, and luckily the reporter thought it was dang cool. He did a short video interview… as he pans around the fort he gets my house in the background! 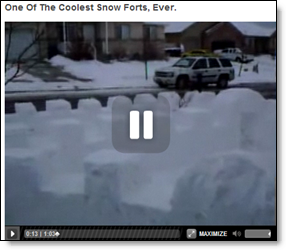 So there you go. January has been amazing, and it’s been fun to see the fruits of my labors pay off in various ways.

Thank you for letting me brag, just a little 🙂

6 thoughts on “More Exposure For JibberJobber”