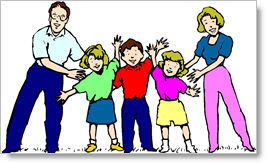 I feel like the topic of this post violates what I wrote yesterday, about not liking career advice :p Oh well. This had a profound impact on me, so I’ll share it with you 🙂

Why? I don’t know – maybe some sociologist of anthropologist can inform us. But I found it to be true. In fact, there are other interesting things related to this weird networking issue:

As I started to network outside of the family and friends circle, I found an entirely different type of people and support group. Many of these people were hustling for their own well-being. They were either in a job search or owned their own businesses… but they all had one thing in common – they understood networking and relationships. Since they didn’t know me (or, they didn’t assume they knew me), they wanted to learn about me. We began to develop relationships that went deeper than I was accustomed to. We were helping one another, and introducing each other to our networks.

Now, don’t think this was an overly-superficial process. There were long lunches, and we were really digging and trying and figure out how and where we could add value to one another. In the process, because these were people that ran in completely different circles than I had, we introduced a significant amount of diversity to one another’s network.

As with family and friends, they may not have been the person to refer me to someone that was a decision-maker. But usually they could introduce me to someone who knew someone. The third or fourth degree contact that would be valuable in my job search.

Don’t waste time or effort getting mad with family and friends. Get out there in various network opportunities, and toss your hat in the ring. It’s scary, but you’ll be amazed at what it does to your network.

1 thought on “Where Do You Find The Best Leads? Not From Family And Friends!”