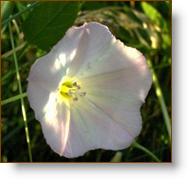 I moved to Idaho about 12 years ago (we moved away more than 3 years ago). When I moved there I frequently visited my new bride’s grandma who, amongst other things, was great at gardening. One of the major pains in her life was a weed called Morning Glory, aka Field Bindweed. It is pretty stuff, but it takes over your yard, wraps around other plants, and spreads kind of like strawberry plants (where a shoot travels above ground and then roots somewhere else). It’s actually pretty nasty.

Grandma would call this, I think, Satan’s star. She really, really hated this weed.

She told me that you just can’t get rid of it. There is no poison, no strategy. Makes sense, considering the roots are known to grow more then six feet underground. Heck, what do I know about weeds? I’ll trust a gardener who has been doing this more decades than I could imagine.

Fast forward about 10 years, I’m now in Utah and working on my own weed control strategy. Morning Glory is prevalent in my yard and garden, as I haven’t been quite sure how to get rid of it. I also have a dandelion problem, and I found some good spray that doesn’t affect the grass but really does kill the dandelions. As I sprayed them one afternoon I thought “I’m going to spray this Morning Glory vine and see what happens.”

It died a few days later.

For over 10 years I had this expert voice in my head telling me that it was impossible, and just on a whim I proved it wrong. It made me think about other things that I have been told, and how that has shaped my decisions.

A job search takes one month for every 10,000 that you need to make. In other words, if I want to make $80,000, it will take eight months to find my next job. Of course this is not true! I think this is probably a good rule of thumb for financial planning, and will be affected by the state of your relationships (aka, networking).

College is critical, masters is becoming critical. I do not regret my decision to get a CIS degree, and an MBA. And, I’m a huge proponent of furthering your education. However, please don’t think that getting degrees, even in hot fields, is going to minimize any pain or problems in a job search or your career management. The same goes for degrees from these online MBA rankings. Even with my CIS degree, my MBA and a job seeker’s market I could hardly get an interview.

Don’t waste time or money on cookie cutter professional help (namely, resume writers and career coaches). I’m a DIY (do it yourself) kind of guy. When I was let go the idea of hiring someone to write my resume or give me career coaching was crazy. Shoot, aside from all of my schooling I was smart and achieved – job titles included IT Manager, VP and general manager. I’m sure that if I had professional help with my resume and my job search strategy I would have landed a fulfilling position much earlier (of course, JibberJobber would have been a fleeting thought, so it’s good I didn’t get help – but I strongly recommend getting professional help).

“That Life” is for other people, not me. I grew up middle class, so that life would be the poor folks or the rich people. Guess what? I can be rich too. I’m not sure how it is going to happen, but I’d like to try a life of no financial worries. On the flip side, I can be one of the poor folk. I didn’t expect to, after all of my education and accomplishments, but unemployment has a funny way of draining your bank account and landing you right in the middle of the “poor” category. While it’s been a good experience for me, I don’t recommend it.

Job boards are useless. Well, that’s a message that I took away from a two day career management class. I misunderstood the real message at first but now realize that job boards are not necessarily the best way to find a job to apply to… but they are an excellent source to collect information for networking (or a job search, obviously) and do competitive intelligence research. And to top it all of, it’s cool that they actually do work. I know plenty of people who have found their current job on a job board.

Entrepreneurialism is for that crazy uncle who’s on his 12th multilevel company, or for someone like Bill Gates or Steven Covey or someone like that (but certainly not for me). Here’s another huge extreme … it’s for the nutty guy who has never, and will never be successful. Or it’s for the uber-successful person who has already done that and is now worth billions of dollars (and somehow made it look easy). I fall right in the middle, I think that everyone should create some kind of side business, or additional income stream, so that we aren’t all dependent on one employer and one income (which is rather fickle).

The bolded statements above are not my beliefs, they are just some old business wives’ tales. I don’t subscribe to them, they are too superficial and outdated.

What are some old business wives’ tales that you think need to be eliminated?