Anita Bruzzese blogs about a Larry Dinsmore who had a very simple idea that (a) grew into an additional revenue stream and (b) landed him a job.

The idea was simple – print a t-shirt that says Damn I Need a Job on the front, and put a letter (like an introductory letter: “dear sirs, … “) on the back. Read about what happened on Anita’s blog (she interviewed him). Some of my thoughts: 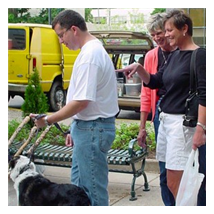 First, he got a job out of this. From Anita’s blog:

“The local news noticed. Actually I called them and told them what I was doing but they were interested enough to come and talk to me and ran the story. That lead to a chain of events where it eventually got back to the IT manager of the place I am now. So yes, my idea was directly responsible for my employment status today. And yeah, there were some weird looks along the way as well.” — Larry Dinsmore

Second, it was a great way to show his personality (sense of humor, pride vs. humility, creativity, guts, etc.).

Third, isn’t this the simple stuff you’d expect to read about on Dave Perry’s Guerrilla Marketing blog (or book)? Dave has hundreds of ideas… the thing is, who’s actually doing it (without going overboard)? Larry did. It worked, and it is having residual results.

Fourth, the “additional revenue stream” that I’ve blogged about before, the idea of not being 100% dependent upon one employer, is in place for Larry. He is set up to make money on shirt sales, sales of a cover letter package, ad space, etc. And from poking around his site it’s clear that he has other ideas that he is working on (like the video resume module).

I ask myself “what did I do that was creative or different in my job search?” My answer: nothing.

Have you ever done anything creative in your job search? Did it work? Where there any benefits?