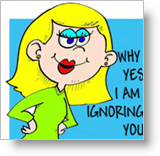 My post last week on creating a monthly newsletter to keep in touch with your network has some interesting comments. The first is from Mario, a CPA in Mexico, who asks:

In other words, how to ask proactively for replies when those guys simply say â€œIâ€™ll let you knowâ€¦â€ but they donâ€™t tell me when they are supposed to let me know and despite efforts to contact them again, the response isâ€¦ nothing?

This is a great question. I think that proponents of networking (like me) probably have a tendency to come across with a PollyAnna attitude, leading you to believe that once you start doing “all the right things” then you’ll get amazing results. Things like “networking into the hidden job market is more effective than applying online” may be misleading (although I obviously recommend it) because (a) the effectiveness likely depends on the position (level) that you want, and (b) just because its more effective doesn’t mean you will get a job faster.

Mario brings up a great point – which falls in the “networking isn’t all that easy” category. Here’s my thoughts on how to respond:

– when you are valuable to someone they will make an extra effort to repond to you, or help you. Ask yourself if they perceive you as valuable to their network, and if the answer is no (or, not much), figure out ways to become more valuable to them.

– Along with the idea that networking is about giving, its kind of also about not expecting (or… demanding?). I’ve put out hundreds of e-mails asking for things, giving updates, and keeping in touch, and have not received replies on many of them. I can either stew over it, or ignore it and send the monthly update to them next month. I really don’t think that you’ll get a 100% response from a campaign like this.

– Should you take them off your e-mail list? I would say NO. Circumstances this month may be different next month, and your newsletter next month might remind them of what they committed to, or prompt them to reply.

– when you say “I’ve tried to contact them again”… did you try and contact them by e-mail? I would suggest a face-to-face meeting, perhaps you buy them lunch. This is not a meeting based on “why didn’t you respond to me” – rather, its a meeting of “I’d like to get to know you better and see how I can help you with your personal or business goals.”

– One thing that I’ve had to realize is that my sense of urgency is different than other people’s sense of urgency. I want an answer now, and waiting a week to get a response really hurts my plans (especially true when looking for a job). But don’t penalize your contact because of your situation. If you communicate your sense of urgency don’t do it in a way where they can smell blood, as that might drive people away.

– Networking is a long-term thing. I do not open my network to everyone immediately. Its based on trust – so ask yourself what you are doing to increase the level of trust between you and your network contact.

When its all said and done, some people just aren’t going to reciprocate. And that has to be okay. Salespeople understand that not everyone is going to buy from them right now – but the good ones consistently communicate to keep that relationship moving.

What this means is that you have a lot of people in your network, and it grows over time. I really, really, really, really suggest you get a free account with JibberJobber to keep track of those network contacts. If nothing else you can put in 250 network contacts, rank the relationships, put log entries and create action items. This is a long-term thing – something you do the rest of your career. If 250 is not enough, there’s a loophole to get an additional 75. If that’s not enough, consider the upgrade 🙂

2 thoughts on “What If Your Network Doesn’t Respond?”