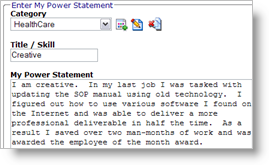 I learned about power statements when I went through a two day workshop early in my job search. The idea is simple yet powerful, and can be useful in various ways (including in a job interview, while networking, on your LinkedIn profile, and even to help refine your resume (not word for word, but capturing the ideas from your power statements.

This was such a powerful concept that I decided to include it as a feature in JibberJobber. You’ll find it in the Interview Prep area, where you can enter your personal responses to interview questions (power statements is one of three things you can enter).

What are power statements?

I am creative. For example, in my last job I was tasked with updating the SOP manual using old technology. I figured out how to use various software I found on the Internet and was able to deliver a more professional deliverable in half the time. As a result I saved over two man-months of work and was received the employee of the month award.

The first part is I am _________. This is where you put a skill, such as ambitious or tenatious. You can also say I am a hard worker. You are simply stating what you are.

Obviously this will come in handy during an interview (it can also provide information to help construct a resume). When you are asked “tell me about a time when you showed X skill” you can deliver a power statement.

As an interviewer I’d really appreciate an answer like this as opposed to a rambling story about all kinds of details that are not important (and detracts from what you have to offer). Ending it with a result ties it all together and nails the point home.

One quick note – in the image you will see the first drop down is “Category” – this is a premium feature which is very cool. After you categorize your interview responses you will be able to print out responses for certain interviews.

Create different responses for these different scenerios and then print off just the answers you need before your interviews.

Power statements are included in the free level of JibberJobber. We want you to be able to use this feature extensively. Really, if I were in a job search right now I’d create dozens of power statements that really help communicate my skills and experience. Create these responses and practice them and you should find your networking and job interviews go smoother than you could imagine.

Do me a favor – in the comments leave one of your power statements! If you don’t have one then now’s a good time to create one. Here’s the question: What is one of your greatest strengths?

2 thoughts on “How To: 3 Essential Parts to Power Statements”