All joking aside, this is getting old.

It got old a month ago.

But it’s not over. Yesterday I learned a friend of mine, and his wife, had both gotten Corona. We’ll see how that goes. Probably fine. Hopefully fine. But for many people around the world things aren’t fine. The old normal has been shaken – jolted. The new normal includes isolation and facemasks and wondering when more tragedy will come.

Will friends or loved ones get sick? Will they die?

Will my job last? Will anyone’s job last?

If we can’t work, and we can’t pay bills, then what? Will we lose houses? Will cars get reposessed?

Let me tell you, many of the things we are worrying about, while real, are not in our control.

I am not a doom-and-gloom kind of guy. But I know there is a lot of uncertainty, worry, and wondering. During this time we can crawl into a protective hole (maybe under our covers), or we can get into fetal position and wait it out. OR, we can have hope that one day we’ll get back to some kind of normal. Assuming we will get back to some kind of normal, what can (or should) we do right now?

The Winter of Your Career

For most of my life growing up I didn’t know what snow was. I was exposed to it at a young age but I lived in places that didn’t have snow. When I was 15 we moved from a tropical island to Virginia, two days before Christmas. And it was then, at that very time, that I thought how ridiculous it was that people lived where it snowed, and got so cold.

Big city Virginia snow life is not like Rocky Mountain ski lodge snow life. A quarter inch of snow shut down schools because “no one knew how to drive in the snow.” The humidity was ridiculous and made the cold that much more unbearable. I had learned to love winter on the beach, and here we were bundled up to the point of being unmovable, the fog seemed like hanging ice crystals. It was just miserable.

Years later I would start my early married life in Idaho. I never did go back to live in the tropics, and by this time was about as used to the snow as I would ever be. But winters in this area in Idaho were depressing. Gray skies forever. Miserable cold. The beautiful white layer of new snow would last a couple of days, then it would be gray and gross. I was not impressed. And I continued to wonder why in the world people chose to live in this forever gross gray, instead of living it up on a beach in the tropics.

Springtime was awesome. Even though there were some false starts, where it was a beautiful warm(er) day, and then it would snow for a few days… you could tell that things were changing. Tulips would be an early sign that winter was ending. Tulips would start to break through the ground and you would hear people say “my Tulips are coming in.” Before you knew it gardens would go in, snowsuits and sleds would get put away, and we’d complain about how hot the summer days were.

Within a few months, it would get cold again. Halloween with snow is dumb. But we did it. And just like that, as if we were never hot and miserable, winter would come back.

You can see I’ve had plenty of time to think about this. When I was in college I’d get out of the house around 6 (I am NOT a morning person, so that was just plain miserable), scrape my windows (a ridiculous ritual), and leave for school during the dark. I’d get home well after dark… months and months and months of this. Wondering WHY PEOPLE LIVE IN THIS ENVIRONMENT.

One of the thoughts I had, as we we close to various large farms, was that winter was a necessary time for the crops and lands and farmers to pause, and prepare for growing season. Just as crop rotation is important, it was important for the land to get a break. The snow on untouched farm fields was allowed to, for months, replenish. The plants were allowed to pause so they could come back strong in the spring.

I’m no biologist… so maybe I was wrong in my scientific assessment, but this was the pattern I saw. And I started to see that we indeed needed a pause. Every single of one of us has this pause within a 24 hour period, when our bodies and minds replenish and rest while we get a good night’s sleep.

I had a career pause in 2006, when I was laid off from what I felt like was my calling, my fast-paced career trajectory. And then the whole thing stopped. Paused. I hated it. I went in kicking and screaming. But I paused.

And then the pause ended, and I’ve been going ever since. My pause sucked. It hurt. It was scary. Really, really scary. But, as I look back on that part of my story, it was necessary.

It was the winter of my career. I replenished. I grew. I recalibrated. I contemplated. And yes, of course, I worried.

I also tapped into family for financial support, and I drained my entire 401k (which was a little more than $60k). Scary. Humbling.

But in a way, healing.

From this experience, that I did not choose, I was put on a new path.

Getting On Your New Path: Creating

I know that going through the winter can be critical for some of you. It can also be painful and scary to the point of paralyzing you. I want to suggest TWO things that you do during your winter. These two things might not pay the bills today, or next month, but they will help you build and grow and develop and replenish and think and heal during your winter.

The first thing I want you to do is to create. Create something. Anything. Build new skills and reinforce old skills. Instead of resting and consuming streaming videos, create something. Try things… what have you to lose? I’m not saying to go build a workshop, or to invest in expensive tools (from sewing machines to kitchenware to drills). Use what you have and create.

One of my favorite stories of this pandemic comes out of Canada. Here’s an article from The Globe and Mail from a week ago: 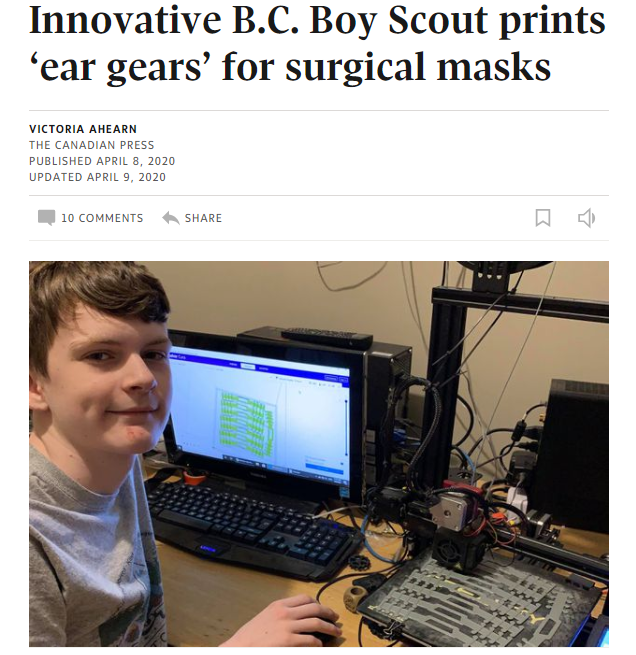 Quinn is 12. He has a 3D printer (although you don’t need a 3D printer to create!) and an active imagination. Curiousity. A bit of a “why not” attitude. He brought to life an idea that I never in a thousand years would have thought of. The idea was sparked by someone else, and then he noodled on it. He came up with prototypes, had a friend try them, and finally settled on a design.

He should not have done this. He was too young to make this big of a difference in the world. It would cost money to print all of these devices, and besides, if he did, who would really benefit? Certainly not the world.

But he did do it. He created. He moved forward. He tried. I’m sure he failed at some things, but he kept creating, refining, doing. And now he’s a hero to people who have to wear masks for 12+ hours straight.

The kid is 12. And he created. He didn’t binge-watch entire series of shows. He created.

Getting On Your New Path: Learning

The other thing I suggest you do during your career winter is to learn. This goes hand-in-hand with creating.

Dave Ramsey has a segment on his show where millionaires call in and he quizzes them on how they became millionaires. He asks a number of questions, one of which is:

“How many non-fiction books do you read each year?”

The answers are usually around two dozen. That is a new non-fiction book every two weeks. I don’t think that’s because millionaires all of the sudden have tons of free time to sip their tea, sitting in their sun room, while their friends go to jobs, so they need to do something with their free time.

I have always loved reading, although I always thought finishing school would be awesome because I wouldn’t have to learn anymore. I would have “arrived.” Over the last few decades, though, I’ve realized that you never “arrive” when it comes to learning. Learning is something I hope to do until the day I die.

It’s one reason I’m so passionate about what Pluralsight offers. For about $300/year you have access to a library of over 7,000 courses. Most of those are for programmers, or data professionals, or techies, but many of them are for other audiences. There are hundreds of courses on soft skills, many around effective communication. That is a topic that anyone and everyone could improve.

Or maybe you do want to be a programmer, or UX designer, or graphics designer, or business analyst, or data scientist, or even just a better manager, leader, presenter, or communicator. There are courses for all of those.

This month isn’t even half over… which means you can still get at least two solid weeks of learning, for free, on Pluralsight. This is their #FREEapril campaign, where they have opened up the library. They are saying “stay home” and “skill up.” I completely agree.

Please turn away from streaming movies, at least for an hour or two, every day, and learn.

Learning now will put YOU in more control, which is important in a time when no one feels like they are in control of much of anything.