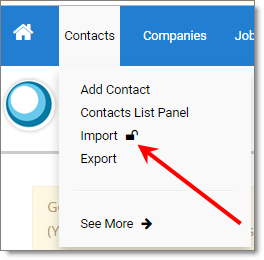 Recently I’ve had a few people ask me how to delete a batch import (you can do it from here). That is, they imported a batch of contacts from LinkedIn or Gmail Contacts, and then found they had a bunch of garbage in JibberJobber, and wanted to delete all of the contacts from that import all and start over.

This happened to me after we did the Gmail Contacts sync, which is really cool in concept, but it dumped hundreds of garbage records into my database. Sadly, I don’t do the Gmail sync anymore… I just don’t want all of that crap in my system.

Why does this happen?

With Gmail, I have a bunch of email addresses in my address book (aka Google Contacts) that are just garbage. Someone I am not in contact anymore, or addresses that are system generated but there is no human behind them. I have more than one “support@_______.com” address in my Contacts!

Why do we have an import/sync function, then?

Frankly, because “everyone” wanted it. Other CRM systems have it, and people don’t like the idea of entering Contacts one-by-one. It really is convenient to click a few buttons and have all of your contacts from one system in JibberJobber. I think, also, that people like coming in to JibberJobber with hundreds or thousands of contacts that they’ve imported, rather than none. The feeling is that you have a network vs. you have no one to talk to.

What is the answer?

I rarely import or sync. I want to control how contacts get into my system. Hands down, my favorite way to get data into JibberJobber is with Email2Log. Why? Because if I email you, there’s a good chance I want to actually have some kind of relationship with you. I can control who and what gets into my system easier than I can with an import, which is likely to import junk contacts.

If I were to start fresh today, using JibberJobber for a job search, I’d skip the import and just put people in manually or with Email2Log. Honestly, that’s what I’d do.

Is there no other way?

Well, yes, there is actually. If you really want to dump your LinkedIn Contacts or Google Contacts into JibberJobber, I’d suggest you do this:

What we used to say in the 1900’s was “garbage in, garbage out.” Clean up your list before you import records… and you’ll have a much nicer database.

If you do import garbage, you can do what some people want to do and delete the entire import. This is great, unless you have added more information on a Contacts, or created Log Entries and Reminders.

Or, you can do what I do… just delete the bad records one at a time when you come across them. This is a more passive approach, and you have to be okay to see bad records every once in a while… this is fine for me.