Not to be a Debbie Downer, but when I saw this headline this weekend my first thought wasn’t “congratulations!!!!”  If one school graduates almost 6k people in May… how many new grads are getting dumped into our economy? 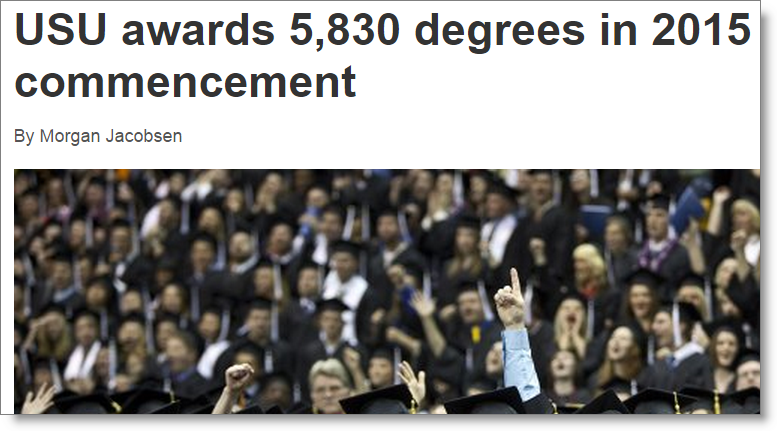 To the almost 6,000 new graduates (from undergrad to PhD)… welcome to the “real world.”  This is the real world your professors and adjuncts talked about for years… you see, there was this illusion that you were not in the real world while in school.

At least that is what I was told: “when you enter the real world…”

What a load of bull.

Here’s the deal: you’ve been in the real world for a long time.  And you made a business decision.  For many of you, the degree will be instrumental in helping you get your first or next job.  For many of you, it will settle in sometime in the next year that the degree was not helpful at all.  Looking at the years to pay off your student loans, you’ll wonder if the decision you made was a good one.  Yes, going to college was a decision… it was a business decision.  The college sold you a package, you paid for it (mostly likely financing it, like a business might). Now is not the time to have buyer’s remorse!

So don’t get discouraged that over 2 million people will earn degrees this year (1.8M undergrads alone, according to NACE).  Don’t be discouraged that there will many many hundreds of thousands of people who will get laid off, otherwise lose their jobs (companies dissolving), change companies, etc. Don’t become disheartened because many jobs have bounced out of your country to other, cheaper countries (and sometimes bounced back).  It’s not that you aren’t more talented or qualified for a career-level job, it’s just that, well, I guess, this is the real world.

Here’s something I learned, after having gotten a degree in CIS and an MBA, and having had job titles including manager and general manager: your education is about to begin.

Most of the facts and stuff you learned at school can be filed into the trivial pursuit box in your brain.  You won’t use much of it.

What you will use is the collection of skills that helped you get that degree.  Hopefully you worked hard, and pushed yourself beyond what you thought you could achieve.  Hopefully you learned about negotiation and persuasion, two key skills when working with others.  Did you learn anything about time management, while you juggled classes and work and social responsibilities? Did you learn about leadership, and how to be a follower, and team-player? Did you learn how to communicate effectively, whether that is written, verbal, etc.?  I hope you learned how to research, learn new things, find practical applications, and just dig in and study.

Those are the skills that you’ll need to tap into now.

You see, once you land your job, no one really cares where or what you studied.  They want to know what you can do, and if you’ll carry your weight.  That’s about it.  The other stuff is fun, but trivial.

Maybe your degree will matter for a little while, but the romance of it all will wear off.  If you are a crappy worker, no one will care (but they will think that your alma mater puts out crappy people – so now you have the burden of not tarnishing the brand of the school that you paid so much money to).  If you are an exceptional worker, people won’t care where you went to school, or what your GPA was.

I don’t mean for this to be a discouraging letter.  I just want to welcome you to the real world.  This is a world where what you can do, and how you communicate your brand, and how you nurture personal and professional relationships, is the new job security.  Or as I like to call it, the new career management.

And of the 2,000,000+ people who will graduate like you did this year, I guarantee that most will not get it.  I’ve seen this for years… they’ll take years, or decades, to figure out personal branding and networking.  If you want to have an easier career path, it’s time to transition into taking personal responsibility for your career, and get serious about your future.

The great thing about this is, if you start now, you won’t have to get student loans for this next phase of your education.