I remember when I was first married (and thus, quite impressionable :p), a friend of mine made a really interesting comment, something like:

Getting laid off is way harder than getting fired.

His logic was that if you get fired, it’s with cause, and you can know exactly what stupid thing you did to get you fired… but if you are laid off it was because of a bigger (group?) failure, and perhaps, just perhaps, if you would have worked harder you could have avoided it.  In other words, maybe it was because you weren’t working hard enough.

In 2006 I was laid-off (not fired).  At some point I was elated to be out of a hellhole that I was in for three years – a hellhole that caused stress on my family, my health, my sanity… but it was a hellhole with a salary and health insurance.

As I was driving home I was thinking of the things I would do — formulating a strategy to get through this short (HA!) period of unemployment, and land a job with a better culture, work environment, and pay than what I was leaving.  I had the world at my feet, I thought, and I was going to conquer.

I had no idea what I was up against.

So, let me share some thoughts with you, if you see the proverbial “writing on the wall.”  Things have changed in the last three years, of course, as have I.  These are the things I’d tell you to do if you are looking at a layoff (or job transition) in the next 12 months:

Get your resume in order. I wasted…. WASTED an entire week just looking for and then trying to recreate my resume.  I had to call my university to get exact dates and names of degrees I got… I didn’t want anyone to do a reference check and find a mistake, thinking i was being fraudulent.

Start getting your network in order. In humility (that means I didn’t do this for a while – until I was humble enough to drag myself to an employment center) I sat down with a volunteer career counselor.  He asked me to start naming people in my network.  I discounted former coworkers, customers, prospects, workers at competitive companies, and family.  This really was my network, but I discounted them all for various reasons.  My network list probably had three people on it.  Pretty darn lame.

This excercise is a BRAINSTORM.  LIST EVERYONE.  Even your great grandma (who might know someone who knows someone…) … don’t discount anyone.

Put all of these people in a spreadsheet.  Just start with names so you don’t get hung up on phone numbers and emails that you might have to hunt down… list names and more names and more names …. get this network down!  And then import this list into JibberJobber, which is where you’ll keep track of each of these contacts, rank how well you know them, put their phone numbers, email addy’s, etc.

Start NETWORKING. The last point was to brainstorm and record.  This point is to meet with people – virtually, on the phone, in person, via snail mail, whatever.  Start making contact with them.

I was apprehensive about contacting someone who I hadn’t contacted in many years.  I worried if they were going to wonder why the heck I was calling them (I’ve heard “Is this Amway?” before :p).  I really didn’t know what I was going to say to them… how to phrase it, and how they could help me.  And I didn’t want to sound like a wounded animal.

Here are the three networking things you need to do SOON:

Understand your finances. We sat down with our congregation leader, who asked us to lay out our monthly budget for him.  He wanted to understand where we were at financially, and how long it would be until we needed financial help.  He also wanted to see what we could easily cut out of the budget (cable, eating out, etc.).  This is simple, but we aren’t budget people, so it was enlightening to understand what our financial needs were month-to-month, and when we’d run out of reserve cash.

That’s all I’m going to recommend… I don’t want to overwhelm you with a list of 20 things to do… but if you want more, I got some great advice from my Twitter network:

I like this advice from Sandyjk, because you will have time to stop and smell the roses and do some stuff you might have always wanted to do – it’s a great time to chill and help and serve.  Maybe you’ll get a completely different perspective on life by doing so?

I especially like her advice to establish an advisory team… very smart!

That was from a “direct message” (DM) so I don’t have a link to it, but the link to the book is Get Back To Work Faster. Jill is terrific! 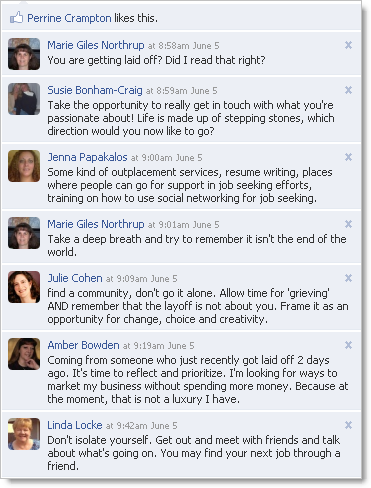 Does this help?  What else would YOU add?

7 thoughts on “Prepare For A Layoff Before It Happens”