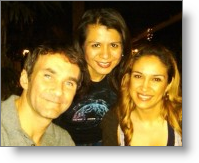 I love a good “success story.”  Especially when it involves technology.

Here’s a terrific story from Keith Ferrazzi.  This isn’t a success story for him… it is a major success for two ladies who met him.

The entire story is on Keith’s blog post.  Here’s an overview:

Keith was in Guatemala to do some charity work with orphans (I’d love to go to Guatemala… it’s on my short list).  One of his fans/readers is in the same city he was and they were following his tweets to see if they could figure out where he was, and hope to meet him in person.  I love the imagery of these two ladies running around a city, reading tweets like they were clues, in hopes of finding sight-seeing Keith!

Finally, as he says, “they got the courage to message me: ‘We’re in the same city, can we buy you a drink?'”  Yes, of course… and they got a group together for dinner that night.

But both used the Twitter as a tool, and they got RESULTS.  To find someone, to track what they were doing, and ultimately to reach out to him.  Here’s a tweet Susette posted that really sums this up … do you think it was a success?

I love this story.  But there is a key factor in all of this.

Keith is on Twitter.  He uses Twitter.  He understands Twitter.  If none of that were true, it wouldn’t matter that Sara and Susette messaged him… but it is an environment he is comfortable with.  And that was critical.

On my LinkedIn blog I wrote why I think you should contact someone OUTSIDE of LinkedIn … it might be better to communicate to someone in an email.  Don wrote a fantastic comment, but his point #3 resonates with my message here… here is what Don says (his entire comment is at the post):

3) Use the communication tool you feel most comfortable with….email to their direct email account, phone and even standard first class mail.

Although LinkedIn is a GREAT tool, not everyone is using it like you are. Use the communications tools you KNOW they are using…email, phone and snail mail!

Still not ready to try Twitter yet? You don’t have to have tons of followers, as this story shows.  It is a great testimony of the power of using tools you have at your fingertips.  Check out my Twitter for Job Seekers recording to help you get value out of Twitter.